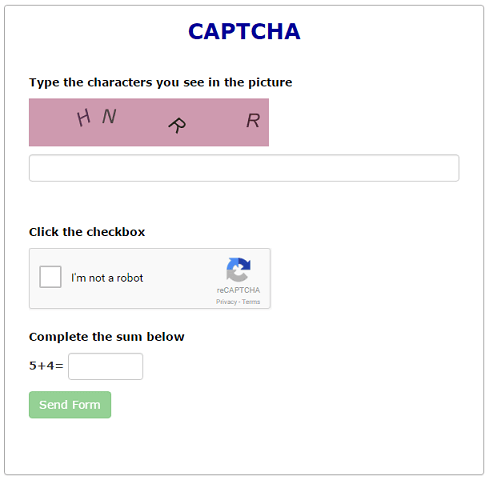 Choose the CAPTCHA that suits

A CAPTCHA is a challenge-response test most often placed within web forms to determine whether the user is human.

The purpose of CAPTCHA is to block form submissions by spambots, which are automated scripts that post spam content everywhere they can.

Formwize offers 3 variants, which are all options within the question.

1. The first CAPTCHA presents an image with randomly generated numbers and letters on a randomly generated background, and requires that the user copies these letters and numbers in the exact order they appear, into an input box before the form can be submitted.

2. The second CAPTCHA is Googles new reCaptcha, which usually only requires one click. Sometimes it presents a simple question based upon images.

3. The third CAPTCHA is an option often used in forms, where a simple maths calculation is presented whjich must be answered correctly for the form to be submitted.

Although this question can appear anywhere on your form, it is best practice to make it the last question on the form.

Have a look at an example form